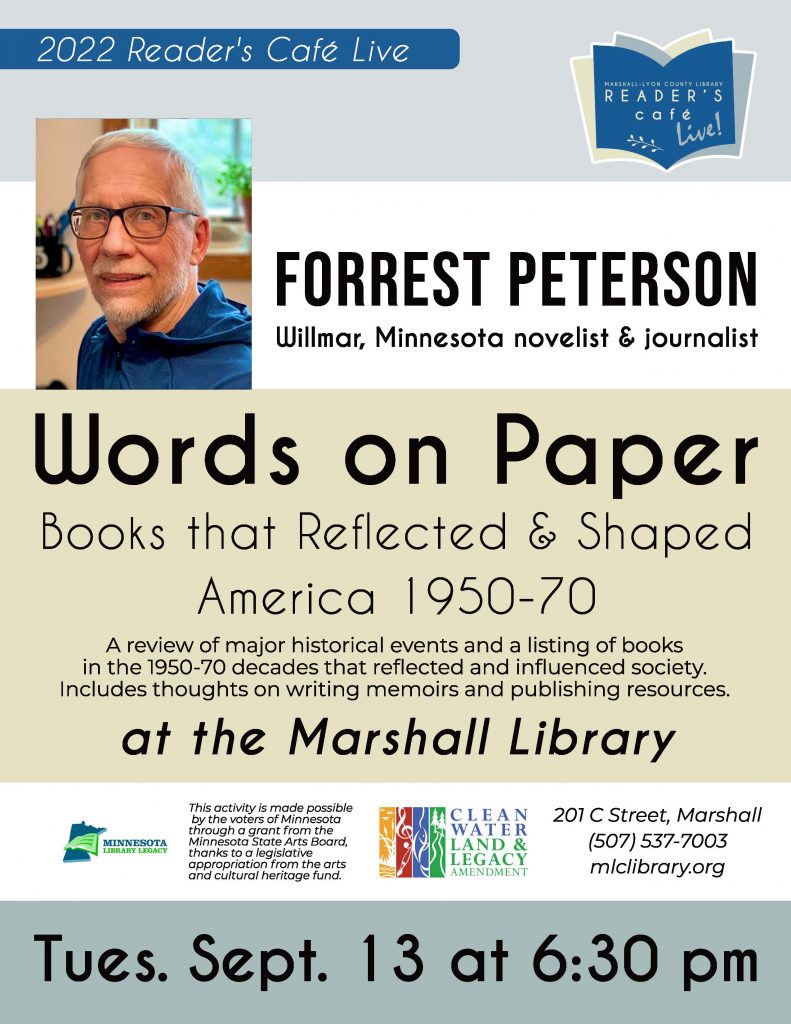 Willmar, MN author Forrest Peterson will present “Words on Paper,” a review of major historical events and a listing of books in the 1950-70 decades that reflected and influenced society. It also touches on writing memoirs and publishing resources.

Major social issues underlying the 1950s post-World War II boom erupted in the more turbulent 1960s. People now in their 60s and 70s were busy as children growing up, perhaps sheltered, and may have only sporadic memories of the news back then. Younger people today can learn from history and the books that influenced society, and how that relationship continues.

Forrest Peterson’s first three novels offer contemporary general fiction set in America’s heartland having themes, plots, and characters with substance. He earned a BA in history from Bethel University and MA in journalism-mass communication from the University of Minnesota. He has participated in workshops at The Loft in Minneapolis and the Iowa Summer Writing Festival at the University of Iowa. Previously, he was managing editor at the West Central Tribune in Willmar from 1982 to 1998. From 1999 to 2021 he served as a public information officer for the State of Minnesota. His novels include Good Ice (2007), Buffalo Ridge (2012), and The Swineherd’s Angel (2020). In 2017 and again in early 2022 he received grants from the Southwest Minnesota Arts Council that support his work. Work on a fourth novel is nearing completion. For more information, visit forrestpeterson.com.

This program is funded by the Minnesota Arts and Cultural Heritage Fund.

This activity is made possible by the Minnesota's Arts and Cultural Heritage Fund. Click here to learn more about Legacy funding.